WHERE ARE YOU FROM ORIGINALLY & WHERE DO YOU LIVE NOW?

California is where I was raised; in a time when there was no north & south, and I currently reside there.

IT’S AN HONOR & A PRIVILEGE TO INTERVIEW YOU, YOU’VE BEEN AROUND FOR SOME YEARS, CAN YOU TELL US ABOUT THE YEAR & WHAT WAS GOING ON WHEN YOU GOT INVOLVED WITH THE BREED?

My first dog was a game dog. In 1975 there was a huge dump of dogs from kennels and backyard breeders feeling the heat from the crackdown on dog fighting.

HOW WERE YOU INTRODUCED TO THE AMERICAN BULLY BREED?

This concept of “BULLY” is really more complex than most would admit, especially in regards to calling it a breed. It has been my view that “BULLY” is a phenotypic expression that should be balanced from front & back. Hence the shoulder width should only be slightly wider than the hips. Now that is only challenged when we are not speaking of a well pedigreed dog. When other breeds are introduced to achieve this, then the concept of phenotype is gone and hybrid should be used. Albeit, I’m not a fan of eugenics or Darwinism, some ‘care’ should be given when describing percentage dogs against small pool gene variation dogs. Surely, I digress…the first dog I encountered that was “BULLY”, which before Razors Edge existed, was a Shaw’s dog. Which appeared to be an AKC Staffy-Bull registered as an American Pit Bull Terrier (APBT) in another kennel club.

DID YOU HAVE A MENTOR OR GUIDANCE WHEN YOU 1ST STARTED?

Huey Newton; taught me that you never own a dog, you share a journey. Russel Means; taught me that the difference between wolves and dogs is time… time changes the orientation of need, and need becomes dependence over time.  Bobby Lavender; Dogs are two types: One runs the street the other runs the yard. REAL DOGS DON’T BARK!

DID YOU ATTEND SHOWS, OR ARE YOU MORE INTERESTED IN BREEDING, OR BOTH?

‘Shows’ are where I learned about classism. I grew up knowing about racism, but the stratification in ‘shows’ is present. I found it hard to understand, how power and corruption could creep into a hobby that was designed to encourage the new breeders and nurture their orientation into responsible stewards of canine citizens.

TELL US ABOUT YOUR 1st SHOW.

My first Show was UKC, and I worked with a handler.

YOU’VE BEEN AROUND AND SEEN SOME LEGENDS, CAN YOU TELL US ABOUT SOME OF YOUR FAVORITE “OLD SCHOOL DOGS?” (TOP 5)

Since this is a working dog, let them work. Find their strength and improve the breed through positive contribution.

WHAT WAS YOUR VISION OR MAIN GOAL?

In the last question, in regards to – top favorite dogs, I purposefully avoided giving up names to popular historic dogs in order to protect my breeding program. I have aspired to re-create a crypto-canid that haunts my memories. So, let’s start from the beginning…

My great grandmother while in the ‘Trail of Tears’ was beaten by a cavalry officer. The rifle butt left an imprint on her head, the only thing that brought her solace was the family dog. She was between the age of 4-7 years old, and would not let go of the dog. This was the story told over and over again from multiple sources. Amongst the various theories as to what comprises a pit bull, the black & tan or so-called tri-color emerged when certain dogs are bred together.

In the AKC, the black & tan Bulldog is not allowed to enter into the show, similarly the black & tan or tri-color dog was not favored in UKC show circles. So, if not for Bert Sorrells, I would have never connected the black & tan & tri-color dog to early origins of what is an APBT. Amongst the Seminole tribe, these dogs where known as Indian dogs. So, in moving forward in breeding, and paying homage to history of the breed – My ‘goal’ is to bring about this crypto-canid within breed standards. 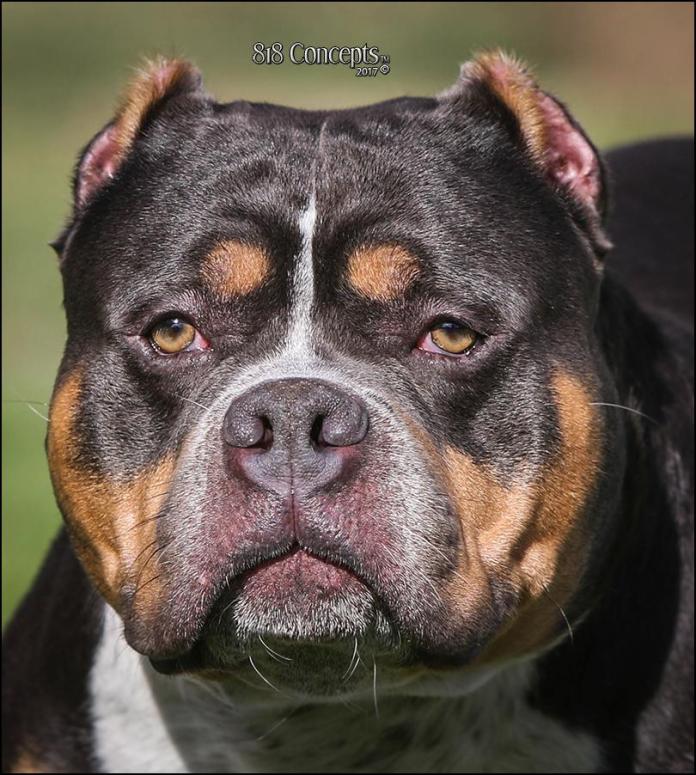 TELL US ABOUT SOME OF YOUR PRODUCTIONS STARTING OUT, AND WHERE YOU’RE AT TODAY?

The dog that I’m most proud of – her off-springs are still being used worldwide for mine detection. I purchased her in 1984 in Hawaii, an although she did not have kennel club papers…her pedigree was etched on top a table in the dining room of the family I bought her from, which span from WWII. Her puppies are currently used in Cambodia, Thailand, & on the boarder of Myanmar. In the 90’s they were used in the ‘Bosnian Conflict’. Three of her puppies have been ‘IRON DOGS’ in Colombia

IN YOUR OPINION, WHAT HAS CHANGED IN THE BREED, BOTH GOOD AND BAD?

Good– Separate registers for dogs with add mixtures, hybridized, or dogs with 3 or more physical faults.

Bad– The idea that all the variations or phenol-types are separate breeds.

Young breeders flocking to new registry’s in order to bypass acknowledging the work of the game dogs. Which are the foundation blood of all dogs which we consider to be APBT or “BULLY” breeding.

This disunity amongst kennels to the point of violence. Even when both kennels have mutual ancestors.

Chemical enhancement leading into shorter lives of the dogs, and lack of quality of life. 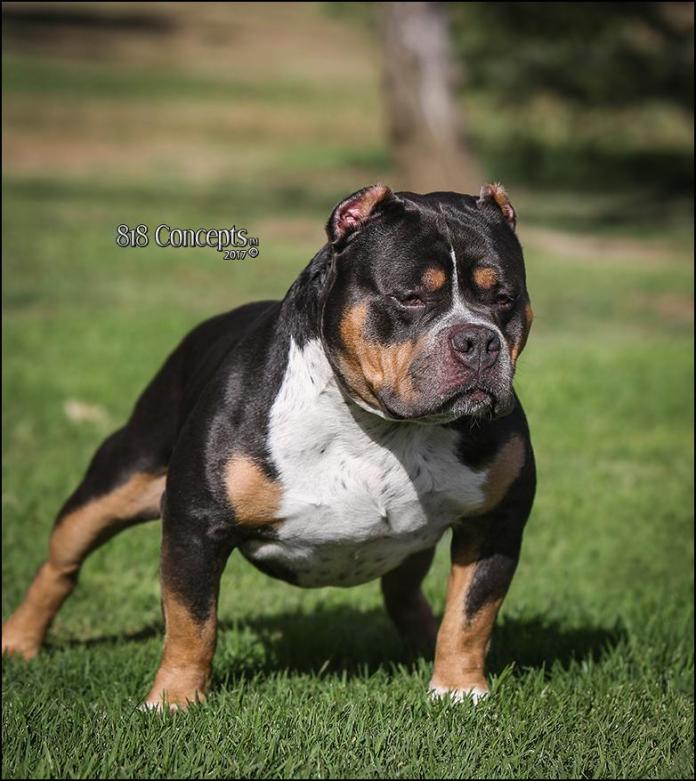 WHAT ARE SOME OF YOUR FAVORITE DOGS OUT NOW?

The reason why I picked out the Top 5 that I picked, is because the impact that they had on society in general and in particular the positive image they portray. Who doesn’t remember ‘Petey’ from ‘The Little Rascals’!

WHAT INDIVIDUAL DOGS HAVE PLAYED THE MOST IMPORTANT ROLE IN YOUR PROGRAM?

TELL US ABOUT WHAT YOU’VE GOT PLANNED OVER AT YOUR KENNEL?

In regards to Kennel; we don’t operate a super max prison! It’s more of a Level 1 country club setting, and we don’t view our dogs as inmates, we view them as trustee’s. As far as what we have planned; we are not breeding couch potatoes. We also don’t breed baby seals, penguins, or giraffes. We are sticking to the old recipe of the junk yard dogs- short, compact, thick boned, straight-bite (not hard mouth) dogs that can walk more than the 4 blocks and be all around family members as opposed to inmates.

LET US SAY THAT IT HAS BEEN AN HONOR SPEAKING WITH YOU. IS THERE ANYTHING THAT YOU’D LIKE TO LEAVE OUR READERS WITH?

It’s important that the APBT as well as the “BULLY” community stay unified. With current law changes, BSL, and the overall demonization of the breed seems to grow and not only erode the constitutional right of ownership of these beautiful dogs; 42 years, I’ve studied genetics & breed development and since the onset of the ‘genome project’; the tools are available to seek the truth in the genetic make-up of this breed as well as ourselves. There are many things that separate us, let the loyalty and determination of this breed instill these qualities into their owners – REAL DOGS DON’T BARK!